Yext (NYSE:YEXT) had its target price decreased by Morgan Stanley from $13.00 to $12.00 in a report issued on Friday morning, Analyst Ratings Network reports. Morgan Stanley currently has an underweight rating on the stock.

Separately, Zacks Investment Research cut Yext from a buy rating to a hold rating in a report on Thursday, July 29th. One investment analyst has rated the stock with a sell rating, two have given a hold rating and three have assigned a buy rating to the company. According to data from MarketBeat, the company currently has a consensus rating of Hold and a consensus target price of $16.75.

Yext (NYSE:YEXT) last released its quarterly earnings results on Wednesday, September 1st. The company reported ($0.06) earnings per share (EPS) for the quarter, topping the Zacks’ consensus estimate of ($0.07) by $0.01. The firm had revenue of $98.12 million for the quarter, compared to the consensus estimate of $95.05 million. Yext had a negative return on equity of 40.41% and a negative net margin of 23.00%. The company’s revenue for the quarter was up 11.4% on a year-over-year basis. During the same period last year, the business posted ($0.07) EPS. Sell-side analysts expect that Yext will post -0.7 earnings per share for the current year.

Yext, Inc is an emerging growth company engages in software development. It offers a cloud-based digital knowledge platform, which allows businesses manage their digital knowledge in the cloud such as financial information, resources and performance of these resources on a consolidated basis and sync it to other application such as Apple Maps, Bing, Cortana, Facebook, Google, Google Maps, Instagram, Siri and Yelp.

See Also: How to Invest in an Index Fund 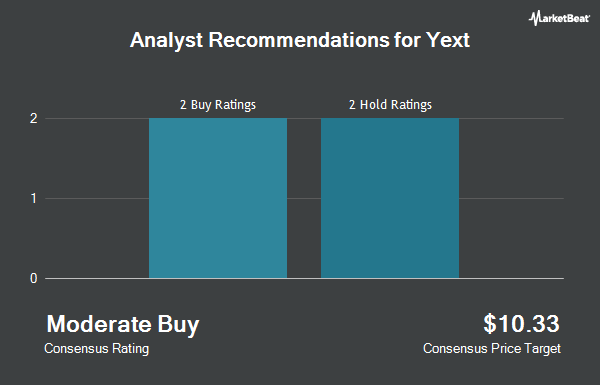