Wall Street has been somewhat nervous this week as worries about the ongoing pandemic don’t seem to be easing. As a result, the stock market has given back some of the ground it had gained en route to its recent record highs.

The Nasdaq Composite (NASDAQINDEX:^IXIC) held up the best on Thursday, while the S&P 500 (SNPINDEX:^GSPC) and Dow Jones Industrial Average (DJINDICES:^DJI) saw slightly larger drops on a percentage basis.

In that context, the huge winners of the day were especially noteworthy. Gevo (NASDAQ:GEVO) and LoveSac (NASDAQ:LOVE) aren’t exactly household names, but they’re wowing Wall Street in a way that’s making a lot of people take notice.

Shares of Gevo soared 37% on Thursday. The sustainable energy specialist made an agreement that could dramatically enhance its long-term business prospects.

Gevo and oil giant Chevron (NYSE:CVX) announced that they had signed a letter of intent to invest jointly in building one or more facilities to produce sustainable aviation fuel from corn. According to the companies, the facilities would also be able to produce some desirable byproducts, including corn oil and various proteins likely for use in animal feed. 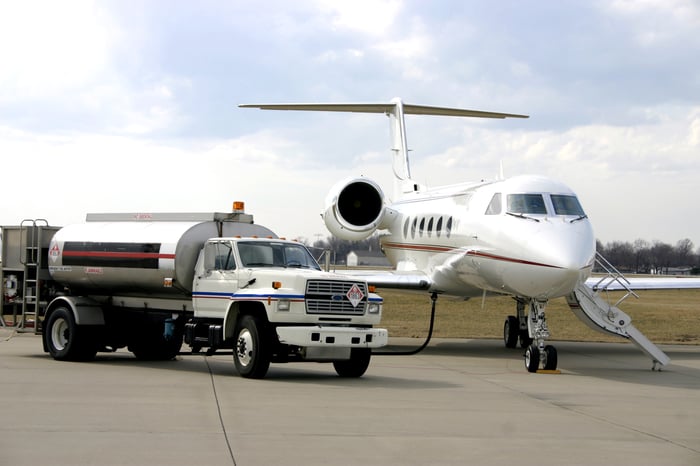 Aviation has a large carbon footprint, and many environmental advocates have targeted the airline industry as a place to encourage sustainability efforts. Moreover, under the collaboration, Chevron anticipates also having the venture generate renewable blending components that it can add to regular automotive gasoline in order to reduce its carbon intensity as well.

Chevron will get the right to take 150 million gallons of the facility’s production for its customers, but for Gevo, one benefit is the spotlight the deal puts on its sustainable energy technology. Investors are hopeful that this is just the beginning for Gevo in its mission to make energy users more carbon-friendly.

Meanwhile, shares of Lovesac finished the day up 24%. The home furnishings specialist showed strength in its latest financials that hinted at a long growth runway ahead.

Lovesac’s second-quarter results were extremely good. Net sales jumped 65% to top $100 million. Year-over-year comps were up almost 40%, even following a 72% jump the previous year. Internet sales did fall by 36% from year-ago levels, but Lovesac more than made up for that by nearly quadrupling its comparable showroom sales. Gross margin expanded almost 7.5 percentage points to 57.6%. Even better, the company reversed its year-ago losses and turned in earnings of $0.52 per share — higher than most analysts following the stock had anticipated.

Lovesac attributed its strong performance to a number of factors. The retailer was able to reduce its use of promotional discounting, which contributed directly to the margin improvement. Moreover, it has been able to negotiate with suppliers to deal with the impact of tariffs while also shifting its supply chain away from China and toward countries such as Vietnam, Malaysia, and Indonesia.

Best of all, Lovesac says its success has continued into the third quarter. That’s good news for investors, and it shows that the home furnishings company might be able to sustain its momentum much further into the future than many had expected.