Equities analysts forecast that AppFolio, Inc. (NASDAQ:APPF) will post $93.43 million in sales for the current fiscal quarter, according to Zacks Investment Research. Two analysts have made estimates for AppFolio’s earnings, with the highest sales estimate coming in at $94.66 million and the lowest estimate coming in at $92.20 million. AppFolio posted sales of $84.09 million in the same quarter last year, which suggests a positive year-over-year growth rate of 11.1%. The business is expected to announce its next quarterly earnings results on Monday, November 8th.

According to Zacks, analysts expect that AppFolio will report full year sales of $352.87 million for the current fiscal year, with estimates ranging from $352.70 million to $353.04 million. For the next year, analysts expect that the company will report sales of $421.87 million, with estimates ranging from $419.60 million to $424.15 million. Zacks Investment Research’s sales calculations are a mean average based on a survey of sell-side research analysts that follow AppFolio.

AppFolio (NASDAQ:APPF) last released its quarterly earnings results on Sunday, August 8th. The software maker reported $0.06 earnings per share for the quarter, missing the Zacks’ consensus estimate of $0.10 by ($0.04). AppFolio had a net margin of 43.04% and a return on equity of 48.85%. The business had revenue of $89.04 million for the quarter, compared to analyst estimates of $89.43 million.

Several research analysts have recently issued reports on APPF shares. Zacks Investment Research upgraded AppFolio from a “sell” rating to a “hold” rating in a research report on Tuesday, May 4th. DA Davidson upgraded AppFolio from an “underperform” rating to a “neutral” rating and reduced their price target for the stock from $126.00 to $122.00 in a research report on Tuesday, May 11th. They noted that the move was a valuation call. One equities research analyst has rated the stock with a sell rating and three have issued a hold rating to the stock. AppFolio currently has a consensus rating of “Hold” and a consensus target price of $129.00.

Further Reading: What is a Stop Order? 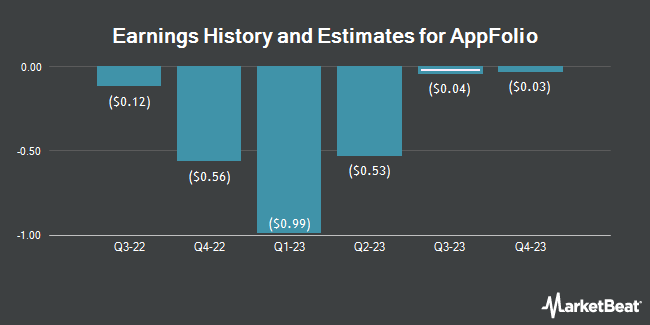